For the Love of the Chase 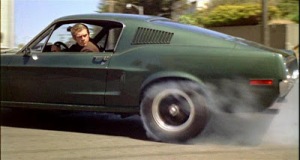 I can describe the smell of burning rubber, but does it get the adrenaline going then?

I love chase scenes. I love watching them in movies, I love seeing them on TV, I love reading about them in books, and I love running them in RPGs. There is, however, a problem:

I am a writer, not a movie director or a TV showrunner, and chases are goddamned hard to make work in fiction. The act of description (of showing not telling) runs at odds to the pacing of a good chase. You want the chase to rocket from one moment to the next, you want the reader on the edge of their seat as the chasers/chasees teeter ever closer to disaster as they veer in and around the obstacles set in their path, be they pedestrians, ancient Roman pillars, cliffs, or what-have-you, but describing that in sufficient detail becomes a very delicate balance. Not enough and the reader can’t see what you are trying to convey and too much means the whole things slows down.

I’ve been trying to think of chases in books that work the same way that scene from Bullit does or the ones in any given Fast and the Furious movie. Hell, even the foot chases from The French Connection or Casino Royale would be acceptable. I’m having trouble thinking of one, honestly. There’s the pizza delivery scene in Snow Crash, which is cool (but not really a chase) and Hiro Vs Raven on cyber-cycles (which is okay). There’s some stuff in Tolkien, but Tolkien is anything but an ‘edge of your seat’ writer.

Maybe I’ve struck upon something here. Maybe I just don’t read enough of the right genres for these things to pop up consistently. In any event, I’m going to keep trying to figure out the chase and put it in my writing. ‘Edge of the Seat’ is sort of my fiction-writing mantra in many of my projects, and the chase is a key element of any good suspenseful storyline, I think. Chasing and being chased is an ancient and instinctual activity. We dream about it constantly; the thought of the hounds at your heels, baying into the night with the scent of blood in their nostrils, is the stuff adrenaline surges are made of. The fight or flight response is some healthy, powerful dramatic material that needs dredging from time to time. The ‘Fight’ part is well-established in fiction, but where would it be without the flight? Without that sensation of chasing down your enemy, stretching your fingers out to seize his traitorous throat, only to feel your fingertips graze only the hem of his jacket?

I think there’s a little bit of poetry in action scenes, be they chases or otherwise. Good writers need to embrace that balance of economy of diction with properly evocative turns of phrase in order to elicit dramatic effect. It’s damned hard work, but rewarding if you get it right.

Or, at least, I presume so. I’ll let you know when I feel I’ve gotten it right.