On the Slopes of Mount Radu

Author’s note: What follows is some teaser text for a gothic horror RPG campaign I’ve been running and am currently attempting to restart. I hope you enjoy it.

Life is cheap on the slopes of Mount Radu.

The boy has heard this from his father, spoken in bitter tones over cups of vocht, after the concertina ceased to bluster and old Nirri had fallen to snoring before the fire. He hadn’t ever really known what he meant. Now he think he knew.

The boy’s sister had found the crack in the basement wall. She, being a good girl, had run to tell father, and father had gone down with mortar to seal it. The boy had gone to sleep before father had come up, and then next thing he knew he was being shaken awake and had a beaverskin coat thrust on him and they were out in the bitter cold of the night, the snow crunching beneath their feet. Mother and sister would not answer the boy’s questions, and father was wild, crossbow looped over one shoulder, torch clutched in one white-knuckled fist, waving the flame at any shadows that looked suspicious. 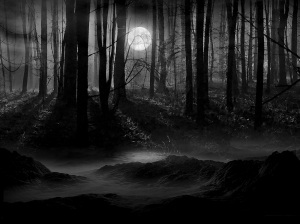 They were to walk all night to the neighbor’s house, Veldavaya. The fir trees seemed to shuffle closer to them at night, and the boy breathed into his hands to keep them warm. His eyes darted towards the pale gray shapes the snow made on the tree trunks. Did that one move? Was that a light? An eye, like in old Nirri’s stories, red and hateful, gleaming in the flickering torchlight?

Where was old Nirri? The boy had asked, but no one had answered. Mother’s mouth got tight at the edges and she shook her head. The boy didn’t know what to make of it.

“Shhhh!” Mother hissed, but it was pointless–no one was talking. They did stop walking, though. Silence fell on them like a quilt. They huddled around the torch, eyes searching the dark, mouths open.

“RUN!” Father yelled. He seized the boy by the collar and dragged him, the boy’s legs flailing as he tried to get himself upright. Father wouldn’t give him the chance. He dropped the torch and tucked the boy under his arm like a hen. The pale glow of the starlit snow whirled before the boy’s face, pine-needles and icicles brushing by his raw cheeks. He heard his mother scream. He heard his sister shout his name. Father did not stop.

The sound of the little feet in the snow had become a stampede. It was joined by shrill cries and sharp little laughs, and the boy closed his eyes. Here they would die, just like in the stories. Dragged beneath the mountain, to be thrust in the stew-pot at the table of the Goblin King. The fate of bad little boys and bad little girls, just as old Nirri had always said. The boy wept and shouted he was sorry, but he didn’t know for what. He didn’t want to die. He didn’t want father and mother and sister to die for what he had done, whatever it had been.

Father fell to the ground and the boy landed face-first in a snow drift. He scrambled out in time to hear the cry of a horse and the thunder of hooves as they galloped past, huge and somehow blacker than the night. There were riders with torches and sabers. They dove into the underbrush without call or trumpet; the boy heard shrieks of dismay from the darkness and, somehow, he knew the goblins had gone. They were saved. The boy got up, trembling. His father took him by the shoulders and hugged him close.

Then the riders came back. There were six of them, clad in silver mail with snow-white cloaks. Their faces were covered by a mask of alabaster, showing an angelic face, serene and at peace, with black, vacant holes where the eyes should be. The riders surrounded the man and the boy and looked down at them both with those empty, black eyes. For a long time, no one stirred.

Father knelt before them. “My regards to Prince Ladislav, and my thanks. You saved us.”

“There is a price.” The voice came from one of the riders, but the boy couldn’t say which. It was thin, cold whisper, like rainfall on snow.

“There is no other way?”

“Are you refusing the Prince’s protection, woodsman?”

Father rose and took the boy by the hand. He did not look at his son, though. Not again for that whole night.

This was how the boy learned just how cheap life is on the slopes of Mount Radu.

Out of the Mists… 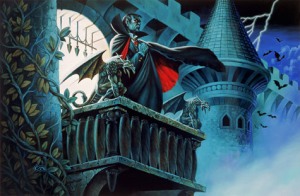 A long, long time ago I ran a campaign in the Dungeons and Dragons setting, Ravenloft. For those of you who have never heard of it, it’s a gothic horror themed campaign setting–werewolves, vampires, ghosts, and creepier things, all stuck together in one of the most depressing worlds in existence. It was in that campaign, run between 1992 and 1995-ish, that I really cut my teeth on how to make RPGs scary (for more info on how I did/do this, see here).

I never felt, however, that I really got the most out of the campaign setting. For one thing, the high-medieval fantasy tropes of D&D don’t fit very well into a gothic horror setting. I had druids and dwarves and paladins running around stabbing things with long swords or casting ‘Cure Light Wounds’ and it kinda tanked the mood. For another, I wasn’t quite as talented a GM then as I feel I am now (well, to be honest, I wasn’t very talented at a whole lot of things–I was 14). I read a lot of the fluff text and adventure ideas and I couldn’t quite see how to make them work, and a lot of this was because I still felt the urge to make pen-and-paper RPGs work more like video games, which is a bad idea (and part of the reason I dislike 4th Edition D&D).

Some of the things I did (and do) like, however, is the structure of the world, its rules of operation, and the dramatic potential contained therein. For one thing, I LOVE the idea of the Mists. The Mists, you see, are the faceless, inhuman power that shapes Ravenloft–you wander into them, lose your way, and find yourself in some new, terrible place. They suck people in from other planes of existence, trapping them within Ravenloft with no hope of escape. These travelers are forced to wander the dark roads of the Realm of Terror, saving others and themselves from evil or, even more likely, slowly succumbing to evil themselves. It’s a kind of Quantum Leap, but in reverse. Maybe, someday, they earn their ticket home. More likely they, like Sam Beckett, remain in Ravenloft forever.

My favorite character in this campaign was Jim Bob–played by my friend Ryan–who was a Confederate soldier from the American Civil War who got sucked into Ravenloft right off a misty battlefield in Virginia. He added just the right kind of flavor to the campaign, and the drama surrounding the use of his rifled musket was absolute gold (can he load the silver shot into the muzzle before the werewolf finds him? Can he? Oh god, it’s getting CLOSER!).

I’m considering, as of this moment, running a new Ravenloft campaign. As is my wont, however, I’m not going to take it as-is–it’s getting a face lift. For one thing, in tribute to Jim Bob, I’m going to let players bring in characters from any world, any time, any place. Furthermore, the reason the Mists have sucked in these characters is because they have darkness in their soul–the Mists want them. It becomes the players’ objective to see if either (a) they can tame or purge that darkness and, therefore, earn their escape from Ravenloft or (b) succumb to their darkness, embrace it, and become one of the Dark Lords of the Realm of Terror. This is a horror RPG, but with characters with agency (not Call of Cthulhu, with its pathetic weaklings doomed to death and destruction).

The problem, however, becomes selecting the system best suited to running such a game. I’d like something that focuses on internal character development (like Burning Wheel, Riddle of Steel, etc.), but also maintains relatively simple gameplay (in accordance with the rules of horror RPGs). I was thinking of, perhaps, adapting Hunter: The Reckoning, but I don’t remember the World of Darkness system well enough to say whether it’s a good fit or not. I don’t mind writing in additional mechanics, if need be, but I don’t have the time to write up a whole new rule system. Anybody have any suggestions for me?

Anybody want to play?