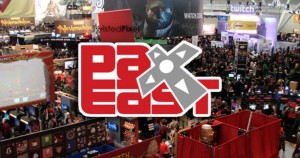 Hey, any of you nerds going to PAX East this year? If so, I think you should know that I and a select group of alpha nerds (Bobby Smithney, John Perich, John Serpico, and Samantha LeVangie) – authors, improvisors, directors, and teachers – will be heading up a panel on Roleplaying in the Now – how to use Improv skills in tabletop RPGs.

Have you ever wanted to break out of the monotony of killing things and taking their stuff? Have you ever wished there was a way to give your players more autonomy in a game without it driving you up the wall? Well, Improvisation in Roleplaying: How to Run a Game in the Now is the panel for you! A panel of experts (including me) who collectively have over 90 YEARS of tabletop gaming experience are going to tell you all about it. Oh, and here’s the kicker: PAX East (as of this posting) isn’t sold out for Thursday yet, so you can still go! There’s time!

So be there, or be a rhombus!

Yes AND I’ve got green fire, too!

I was recently interviewed for the podcast Yes and Dragons, which discusses how improv/improvisational theater and RPGs intersect. In the interview, I discuss how improv, gaming, and writing intersect quite a bit, and it was a really fun interview. Go and check it out and, if you liked it, check out the other episodes of the podcast, which will be releasing once a week going forward.

Oh, and there was something amiss with my microphone during the interview, so it sounds as though I’m talking inside an airplane hangar. Sorry.

Anyway, give it a listen! If you’re interested in any one of those three topics, I hope you will find it enlightening or otherwise useful.

Me on Stage! Tomorrow at ImprovBoston!

Tomorrow, if you live in the Boston area and have a free evening, you should really come on down to Improv Boston in Cambridge to see me interviewed on stage for their Spotlight Series, after which I gather there will be comedy improv based upon the things that I say. IB has a talented

bunch of performers and it should be a hilarious, good time. You can also say hi to me afterwards, no doubt, as I will be there in the flesh and what-not. I mean, assuming you want to talk to me. You can also duck out the back door and dodge the goons I’ll have there waiting for you. That’s an option, too. But, you know, sooner or later you’re going to have to pay me that money you owe me, sooooo…

This will be the first time I will be on stage in this kind of performance setting since I left Improv Boston as a performer in 2005. In my five years with the theater, I performed in 12 different shows of varying sizes, directed and assistant directed a few shows, and was one of the architects of Quest – IB’s super-popular fantasy serial show. It was a great, great time and I made a lot of friends and learned a lot of things.

As the years have passed, I find my improv training comes in handy just about all the time. I am delightfully devoid of anything resembling stage fright – I will get up on stage in front of any number of people wearing anything and say whatever without really breaking a sweat (just don’t ask me to dance). I am a champion of doing things by the seat of my pants. It is very hard to knock me off-kilter when I’m teaching a class – I can work the class clown right back into the lesson without breaking stride. All of these things are life skills I either learned or honed through improv theater and have served me very well in my day-job as a lecturer and teacher.

It also helps my writing. Improv, in a lot of ways, is like the antithesis of writing a novel or story – what you do on an improv stage is collaborative, frequently aimless, and usually ephemeral. Writing a story is solitary, firmly directed, and intended to last. However, one of the biggest questions every writer fields is “where do you get your ideas” and nothing gives you a better answer than the skills you develop in improvisation. See, improv comes from everywhere and can be inspired by anything. There are stories and jokes and moments all around you, waiting to be observed. The improvisor sees these bits of inspiration, seizes upon them, and lets their imagination run rampant, free-associating and inhabiting the story they are weaving on the fly until some kind of pattern emerges to ground it. Writers basically do the same thing, just not out loud and not as quickly and not

Pictured: the writer’s mind.
Improv training can help you sort through this.

quite so randomly. Basically, improv is accelerated storytelling, preferring spur-of-the-moment inspiration to meticulous plotting. Now, this does mean that improv rarely rises to the dramatic heights that the plotted, well-considered, well-planned, well-crafted story can, but it manages to capture the excitement of creation and the feeling of wonder that eludes authors so often in an almost effortless way. And it is absolutely perfect for brainstorming new ideas, making new connections, and approaching your outlines loosely, giving your story the permission to breathe and change organically. Improv, in short, teaches you how to be loose without being out-of-control. It teaches you to work with chaos and make something rational out of it, and there are few more apt skills you can learn to become a writer.

So, this is basically a very long and involved way of saying: why don’t you come out Thursday evening, see me in a show, and maybe get exposed to a whole new way of storytelling. I think, in the end, you’ll really enjoy it.