How Dinosaur Train Drives Me Bonkers

If you don’t have small children, you probably haven’t encountered the PBS Kids show Dinosaur Train. Let me tell you about it and why it gives me the shakes while I watch it.

For starters, let me say that it is a wonderfully educational program about the lives of dinosaurs and, more broadly, an introduction to natural history and evolution. It is not doing children any disservice by watching it at all and, indeed, my kids watch it plenty. The show does, however, give science fiction and fantasy writers the heebie-jeebies, and here’s why: 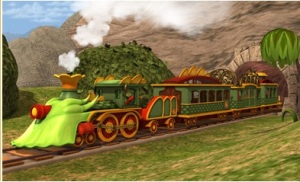 The show’s premise is that a family of Pteranadons and their adopted T-Rex son (no, not the crazy part yet) go on vacations (yes, but wait for it) during which they ride a train (yes, a train) that is run and operated by other dinosaurs (I know, I know) and takes said thunder-lizards on a tour of the land, introducing them to other species of dinosaurs. Oh yes, and just so they can visit dinosaurs from every historical epoch, THE TRAIN TRAVELS THROUGH TIME.

Yes, that’s right: A dinosaur owned, built, and operated time-travelling railroad that takes other dinosaurs on vacations. This is where I start losing my mind.

Here are my questions, world:

1) Why did the dinosaurs build this?

There is no pseudo-modern society in this show, no Flintstones-esque tech, or anything of the kind. Why do creatures with no jobs need vacations? If they have no other visible infrastructure whatsoever, how on Earth would they hit on “let’s build a train?” Even assuming some hyper-genius dino had such an idea, how would they build it with their notable lack of things like tools, mines, quarries, a workforce, and, oh yeah, opposable thumbs?

So, say they manage (somehow) to build a railroad system. How does time travel get involved? What, did aliens come down and give it to them? Did some human go back in time with a time-train and give them ideas? Why would they even think to do this? Dinosaurs don’t have fossil records – there are no archaeologist dinosaurs. THEY WOULDN’T KNOW THERE WERE OTHER TIMES TO VISIT! 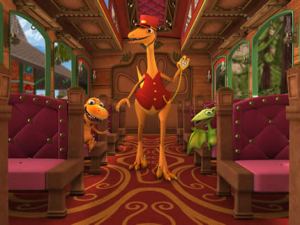 Why a vest? Where does the watch come from? What is it set to?

3) What do they buy tickets with?

Mom Pteranadon buys tickets for the kids when they go places. What does she buy them with? Does she get change? Where does she stash said change (they don’t wear clothes)? How much do they cost? What use is the money anywhere else? If this is some kind of self-contained currency system (like the tokens at Dave and Busters), how does she buy in? Maybe the tickets are free, but again, then, why the hell is this being done?

4) Why is the Conductor wearing clothes?

No other dinosaurs wear clothing. None. What is with this guy? Even assuming somebody had the idea for clothing, what purpose would it serve? Dinosaurs are exothermic, so it isn’t like it would keep him warm, precisely. Of course, we also get back to the question of who makes the damn stuff. Is there a dino-tailor somewhere?

5) What happened to predation?

When the family meets an apex predator (like a T-Rex), why does the scene never end with the family being devoured? What’s going to happen to this family when their T-Rex “son” grows up and eats his “sister?” Why doesn’t anybody talk about this? How are they all still friends, dammit?

So, retain my sanity, I have developed a working theory, here. It’s a bad one, but still: 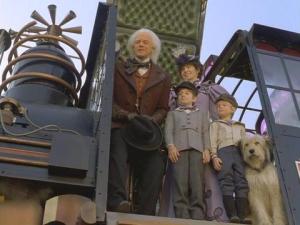 Honey, did you let Verne play with the time circuits again?

Okay, take for granted that the dinosaurs can talk to each other – that’s just a gimmie. Turns out all paleontologists are wrong on that for some damned reason or we’re dealing with a hyper-intelligent subset of the dinosaur population that had a monolith dropped in their midst or something. Anyway, in the midst of their prehistoric savagery, in pops Doctor Emmett Brown on his – you guessed it – his time travelling train. Now, they’re stuck in the Cretaceous Period with no train tracks and, therefore, no way to get up to 88 miles an hour and out of there.

The solution? Well, they make contact with these hyper-intelligent dinosaurs and screw up history something fierce by teaching them to build a train system. “But what’s in it for us?” ask the dinos. Doc comes up with a plan to create a kind of dinosaur utopian state wherein these hyper-intelligent dinos agree to only feed upon their less intelligent brethren. Doc leaves them with a means of scientific discovery (a duplicate train), a framework of an economic system, and a basic social order in exchange for him, Clara, and the boys escaping back to modernity.

The only question left is this: Did Doc tell them about the asteroid? Did he?

Somehow, I think not.