Speaking is Believing (article on The Astounding Analog Companion)

Read my article on the short story in this magazine! It’s free (the article, not the story).

As I’ve mentioned, my short story “Applied Linguistics” is currently for sale as part of the January/February issue of Analog Science Fact and Fiction magazine. As a companion to my story, I wrote a little blog post for the Astounding Analog Companion all about how language influences and even defines our sense of self and purpose. I’m fairly proud of it, and it’s always nice to get the opportunity to wax philosophical about what I’m trying to achieve or explore in any one of my stories. I thank Analog a lot for the opportunity!

Anyway, if you’re interested, go ahead and check it out. I now return you to your regularly scheduled internet.

I’m going to be appearing at Boskone this February 15th-17th in my home town, Boston! Me and hundreds of other professional writers, editors, agents, and so on will be converging for what promises to be a great convention! I’ll be posting my full schedule for the event closer to the date, but I’d love to see you there!

Sounding Out the Words

If you write fantasy or science fiction, sooner or later you’re going to find yourself facing the problem of creating a foreign language. You’ve got a species of aliens or a distant culture and it just doesn’t make sense that they would speak the common tongue of your main characters. Furthermore, even assuming they do speak their language, the odds that the main characters would not encounter nor even pick up a few phrases here or there of the native tongue is pretty unusual. Heck, in many settings, the world is so cosmopolitan that so-called ‘foreign’ tongues are every bit as common as the one the characters speak themselves.

Now, if you’re Tolkien (or a linguist), making up languages is probably doable. At the very least you are going to be pretty good at faking it. Tolkien, of course, made Elfish into a workable tongue before he even published The Lord of the Rings. Similarly, enthusiastic Star Trek fans actually went to the trouble to invent and fully explore the Klingon language, so much so that it has sold 250,000 dictionaries and is considered an artificial tongue of sufficient sophistication to warrant study from serious academics. Damn. 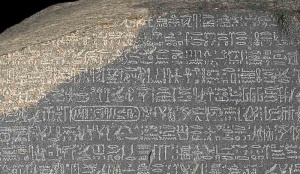 The sad thing is that not all of us are linguists. Sure, I dabble a bit in speech and language structure (I teach English, so it’s sort of inevitable), but I do not have the skills to make up a believable tongue. Few authors are, to be fair, and they get along just fine. Most just create a working vocabulary of cool-sounding non-words and lay it across a map somewhere. Perhaps they put the words in italics (to make them appear special) and pepper them through common speech to give the dialogue a sense of erudition. This is a tried and true method, and it does in fact work so long as nobody comes along and tries to break it down.

As something of a completest/perfectionist, this isn’t enough for me. I want there to be a rationale behind the words. Sure, I’m not above using the cool-sounding-language thing from time to time, but that doesn’t always cut it. I have, therefore, become something of a language thief. I steal phrases and vocabulary from other languages, but mess them up a bit. The internet is a great tool for this – stuff like BabelFish and Google Translate give you easy access to a wide variety of languages beyond one’s typical ken. I’ve filched a lot of French, Spanish, Turkish, and Dutch for Alandar, and the world of Nyxos is being heavily influenced by what cool words I can dig up from Ancient Greek. The words I pick are usually the confluence of ‘sounds cool’ and ‘actually means something’, which gives the language shenanigans a lot more validity in my mind.

But Wait, You Expect Me To Believe People Speak French in a Fantasy World?

This little language theft idea has run into this criticism before. In Alandar, I typically defend it by saying that various cultures in the West are intended to be funhouse mirror reflections of various historical European cultures, so why shouldn’t they speak a version of the real language? I’ll also point out that I am not the first person to have done this, either. Honestly, I’m less interested in the ‘true’ language than in its stylized cousin. Akrallian is not really French; I don’t actually speak French in any competent capacity, so mostly I’m stealing phonics and accents and sounds. It is no more odd to me than every fantasy world ever being chock full of folks with English or Scottish accents, or the fact that everybody’s ancient dead language sounds suspiciously like a bizarro version of Latin. We all want to create an effect with our imaginary languages, right? Well, why not use the real world to enhance or even inform that effect? It can lead to a lot of interesting ideas and discoveries about your own world you may not have thought about before.

Of course, we’d all rather be Tolkien, but trust me: trying to invent your own language is very, very difficult and likely frustrating unless you possess the proper skill set. Trust me, I’ve tried (and continue to try) to do so. It hasn’t gone very well. I’d even go so far as to point out that Tolkien himself stole a fair amount of Elfish from various real languages, too – Finnish, I think, and some old Celtic and Saxon tongues. In the end, if the purpose of fantasy is to cast a twisted reflection of the real world, why shouldn’t we reflect that in the tongues our world speaks? Just make sure your theft is worth it, is all.