Robin Williams once said, “You’re only given a little spark of madness. You mustn’t lose it.” Much of his work, I suppose, can be viewed in this light – the precious value of being “mad,” by which we might mean “different” or “energetic” or “brilliant.” All of them are words that apply to the great actor, for certain.

In Spielberg’s Hook (an often overlooked and, I feel, under-appreciated movie), I think this quote from Williams is given full attention. Peter Banning – the neurotic, work-obsessed alter ego of the wondrous Peter Pan – is a man devoid of any such spark of anything, least of all madness. We watch him go through his life – a wonderful life, mind you – without joy. He lives in fear of everything: of flying, of failure, of life itself, it seems. Peter Pan has grown up and, as it turns out, being grown up kind of sucks.

Then, of course, Banning is compelled to return to Neverland, forced into a fight for the fate of his children (held in the clutches of Captain Hook – more on him later), and must find and rekindle his childlike glee to win the day. This story is interesting in itself in the way it effectively inverts the message of the original Peter Pan. In the original tale, Wendy Darling goes off to Neverland voluntarily to postpone or even outright avoid the prospect of growing up. The longer she stays, however, the more she realizes the life of Pan and the Lost Boys is an unfulfilling one. She returns to London for the express purpose of growing up. Banning goes to Neverland to remember how to be a kid.

Why this inversion, though? Well, I think a significant part of this is due to the fact that Hook, at its heart, is not a story for children. It’s for adults and, even more specifically, for men. Much has been written about how modern conceptions of masculinity essentially damage a man’s emotional capacities. Men are permitted to be angry, sarcastic, proud, and stoic and…that’s about it. Banning, who is actively afraid of much that is happening around him (the result of stress in a highly competitive modern world that demands that he, as a man, be “successful”), is unprepared emotionally to cope with his own stress. Accordingly he lashes out, most notably at his son, Jack. Anger and sarcasm are the only emotional languages he is permitted. 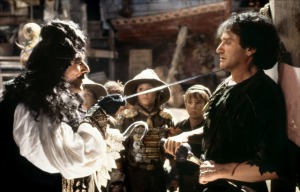 Dustin Hoffman is a *fabulous* James T Hook, by the way.

In this sense, Banning has company. Captain Hook is, basically, the same creature: driven by fear, he is proud, angry, and sarcastic. He actually contemplates suicide to get attention. He fears the clocks, which are symbols of mortality and always have been, even in the original; death stalks Captain Hook and he is terrified of it. He needs Peter Pan to feel young, to feel vital, and even to taste again what it’s like to have fun. He needs Peter Pan in the same sense that Banning needs Hook to break him out of his emotionally stunted rut.

Yes, Pan needs Hook in this movie. Sure, the Lost Boys shepherd Pan to success, but Hook is the person who makes success into something other than talking on the phone with some dude at the office. Like all good antagonists, he drives Pan to remember himself, to grow. Here we have a tale of an older man at the end of his life yearning for youth and a younger man forgetting why youth is useful. Hook relishes his battles with Pan – a vestige of his bygone glory – even while he has totally forgotten joy and has supplanted it, instead, with the desire for revenge and righteous anger. In Hook, Banning/Pan can see his own future.

And that brings us to Jack. Let’s not forget the other male in this movie going through change: Pan’s own son. Repeatedly Jack is told to grow up and told to fear and told to obey by his father. He rejects his father, therefore, and gravitates towards Hook, who is willing to be a “father” figure. The role of fathers in this film is important, as it ties directly into being a man. Fatherhood is an important role for a man to play and how it is played is half the reason men grow up as they do – emotionally distant, stoic, and frequently afraid of a great many things. Banning is inarguably a bad father. Hook knows this, and seeks to turn it against him – perhaps, as a male role model, this is the one way he can strike back at his enemy. Hook inverts Banning’s parenting style; instead of being distant, he is deeply involved in what Jack wants. Instead of being severe and scolding, he is supportive and congratulatory. Of course, he is supporting Jack to be all the wrong things: destructive, selfish, and self-absorbed.

What Jack needs, what Banning/Pan needs, and even what Hook needs is the same damned thing. Not material success, not fawning attention, not victory and revenge – they all need to be happy and free. Manhood, the traditions housed therein, and the way those traditions are expressed are all shown to make that harder, not easier. And yet boyhood – banal, unstructured fun – is not the answer either. Jack gets all his boyhood dreams, but none of it matters one bit without genuine emotion to back it up. Banning is able to revert to Pan, but his childish antics do not and cannot save his children. Peter Banning finds his happy thought by remembering Jack’s birth – this is not the happy memory of a child (new-fallen snow, toys on Christmas, lollipops and teddy bears), but of an adult. It is a happiness far deeper and far more powerful than that achieved by any child – a happiness born of true love. That is the happy thought that literally frees Banning from his shriveled adult prison but also compels him to leave his childish self behind and return to the real world.

And so, in the end, this movie says something very profound to the fathers and the sons out there in the world: no childhood games and no manly dreams of conquest will ever satisfy as much as love of family and the joy of being yourself with those who love you. That spark of madness you must guard is not kept by being in control, but rather from letting go of the masculine self and permitting true, real emotions to guide you.

What To Do With the Lost Boys?

I realize I’ve been writing a lot about Disney, lately. Again, I will simply reference the fact that I’ve a three-year-old daughter and she loves the Disney Channel. Enough excuses, though.

I’ve been watching Peter Pan a lot, and one thing keeps getting to me. At the end of the film, Captain Hook gives the boys an ultimatum: Join my crew or walk the plank. To sweeten the deal, he throws in the offer of a free tattoo (on a side note, I can remember finding this offer sinister when I was a little kid in the 80s; now I think mostly “sweet, free tattoo!”). There’s a whole song and dance routine involved, to boot. The boys, for their part, are really very eager to join until Wendy, the perennial stick-in-the-mud, spoils the whole thing.

Here’s my question, though: Isn’t joining Hook the Lost Boys’ best career option? I mean, what else are they possibly going to do with their lives? Consider the facts: 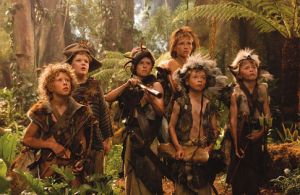 No one pictured here is ever going to college. Additional: two out of three pictured will probably become a felon.

Personal Objectives: To fight, lounge around, have fun, and go on adventures.

Wanted: Courageous individuals wanted to leave civilization behind and sail to distant shores for the purposes of shaking down local populace for spare change, treasure, and supplies. Occasional battle against same requested, as well as boarding actions and naval engagements on the high seas. Must be able to take orders, work well in violent masculine pecking order, and adapt to and embrace extreme hazing rituals.

Required: Mean disposition, affinity for violence, cavalier attitude towards human life and property. No education preferred  ability to swim preferred but not necessary. Proper recruits will show limited discipline unless threatened with physical violence as reprisal.

Let’s be honest, folks –  it’s a Lost Boy’s dream job. Hell, its significantly more exciting than Neverland, anyway. I mean, how many times can you have fake battles with the same damned Indians? Yeah, you’re a perpetual child, but aren’t pirates, to a very large extent, also pretty childish? It’s hardly a mature profession, anyway; it’s thugs in boats stealing stuff. The Lost Boys would train up pretty damned quickly, plus they’d love the boozing, tattoos, and blood sports without a doubt. In the absence of any other reasonable occupation and the inevitable boredom that would have to accompany an eternity in Neverland, there really isn’t much of a downside. Besides, Hook is, by all accounts, at the top of his game. It’s like getting in with Goldman Sachs right out of school (actually, it’s disturbingly like that).

Heck, for all we know, Hook’s presence in Neverland might just be an elaborate recruiting scheme. Where could he find better replacements for a job that, given his penchant for shooting his employees, has got to have a pretty good turnover rate? I mean, granted, the guy starts to lose his marbles when that punk Pan cuts off his and hand throws it to a crocodile, but that’s a fairly reasonable reaction for a famed pirate maimed by a lowly boy who, simultaneously, happens to be a colossal little prick.

Anyway, I’m rambling, but the point is that the Lost Boys missed opportunity’s knock, I’m telling you. They have no idea the amoral, immature playground they’re missing.