Vrokthar Demands Your Elves on Shelves!

Greetings, wretched wetlanders and pathetic cowards of the gluttonous south. It is I, Vrokthar, returned from a long absence to make his demands of you, the fat indolent swine that feed his mighty tribe. When last we spoke, I was pleased with the misery and chaos that was brewing in your decadent civilization. Indeed, this year has been even more glorious than the last! Vrokthar’s invincible raiding parties have been so busy pillaging the ignorant, defenseless villages of your horrid nation that I hath had scant opportunity to taunt thee via my magical word-slate (also, I lost the charger for some time and it was difficult to find a replacement – art thee aware that not all of thy power cords are equivalent? RESOLVE THIS AT ONCE!).

Yes, the mighty warband of I, Vrokthar the Skull-feaster, waxes daily. My warriors are well-fed upon heaps of man-bacon and entertained daily by the many wretched slaves dragged back to my longhouse. Truly, Vrokthar lives in a golden age.

But Vrokthar’s mighty appetites are endless! Though your absence of competent governance has laid the wealth of your impotent nation bare and ripe for the taking, there is still more I desire! No – more I shall have! 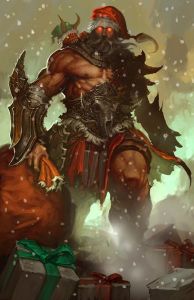 This is how I imagine the Great Claus appears. A worthy foe…

I speak, of course, of Santa Claus.

Yes, my wetlander slaves speak of him often. He is some kind of mystical champion, it seems, who travels forth on an enchanted battle-sledge yearly to deliver his spoils to the worthy among thee. Whilst I cannot imagine what you have done to earn his favor, it irks me that such a being – a sorcerer gifted with such great wealth – might be hiding in the arctic vastness of mine own lands! This is an affront! I will find this Claus, I will take his head, I will raze his house, and I shall take his enchanted sledge for my own! So it shall be!

It is for this reason that I have deigned to contact you, denizens of the mystical ether known as “Inter-not.” Heed carefully my words, for failure to do so shall be met with your endless agony:

BRING ME YOUR ELVES UPON SHELVES!

Do not ask how I know of them! Vrokthar’s sight is as mighty as that of the Claus! How clever of him to install spies in your homes – and also a sign of his weakness. Now, all I must do is capture these tiny creatures and torture them until the location of their master is revealed through their broken teeth and blood-caked lips.

There is an obstacle to overcome, however. Thanks to the Claus’s sorcerer’s tricks, all of the Elves on Shelves I have thus far apprehended have been transmuted to mere cloth and plastic before they could be put to the question. Initially I had thought it a mere ruse or, perhaps, the elves were only able to come to life in the light of the moon. Nevertheless, no matter how many of the perfidious creatures I placed upon my own shelf, they remained inert. The Claus, for all his cowardice, is a clever opponent. He cares nothing for the lives of his diminutive slaves (and well he should not!) and will sacrifice them freely to keep his location secret.

Such resolve, however, cannot last forever. The Claus will make a mistake! Mine own shamans have prepared mighty rituals to interfere with his infernal holiday sorcery. And then, oh, then will his fate be sealed! If torture cannot loosen the tongues of these elves (and Vrokthar’s tortures are mighty and varied indeed!), perhaps I might win their loyalty through the many boons I mighty shower upon their stocking-capped heads.

HEAR ME, OH ELVES! You have been abandoned by your infernal master! He shall transmute thee into mere cloth and fuzz rather than let himself come to harm. But Vrokthar is a far more generous master! Reveal to me the secrets of the Claus, and be showered with all the riches your tiny brains can imagine! Candy! Gold! Slaves! Beasts! Meat and mead in plenty! You need only sunder the chains by which the Claus hath bound thee!

Then, with you by my side, we shall raze the fool’s arctic manse. I shall take his beard as a trophy for my belt, and you shall have any number of his reindeer as yours! Truly, Vrokthar is generous to his friends, but his patience is limited. Speak now, or burn forever in a boiling pool of your own fat!

SO IT SHALL BE!