Meditations on the Sorcery of Free Will

In one of my Expository Writing sections, my students and I have been discussing free will a fair amount. We began with Freud’s take on the matter (it’s all mother’s fault), moved on to Nietzsche (free will is an invention of religions to determine guilt and wrongdoing), and we’ve also been reading a fair amount of current neuro-psychological articles dealing with the actual science behind whether we are or are not capable of free will.

The general consensus seems to be “yes and no”, in that it all depends on what your definition of “free will” is. Roy Baumeister, in this article on Slate, insists that much of the hoopla surrounding the “end of free will” in the scientific community is because the idea of free will is so often poorly defined or misunderstood. The people Nietzsche was yelling at insisted that free will was a manifestation of a soul – an entity apart from your physical body (and brain) able to make decisions independently of physical and emotional stimuli. This kind of free will is effectively unverifiable – there is no evidence to suggest its existence, at least not scientifically. That, cautions Baumeister, is no reason to doubt the existence of free will. Rather than some kind of spiritual or metaphysical process, he insists that there is some really good, strong physical evidence of human beings making free decisions. We are, evolutionarily speaking, the most advanced organisms we know of in the categories of self-control and rational choice which, he claims, is the true basis of what we consider to be free will. Baumeister writes:

To be a member of a group with culture, people must be able to understand the culture’s rules for actions, including moral principles and formal laws. They need to be able to talk about their choices with others, participate in group decisions, and carry out their assigned role. Culture can bring immense benefits, from cooked rice to the iPhone, but it only works if people cooperate and obey the rules.

He goes on to say that “free will” doesn’t really mean the capacity to do whatever you want, whenever you want to; rather it is his belief that free will is the capacity to use rational choice and self-control to follow rules and, thereby, benefit. I’ve read other articles that say similar things, too. Interesting stuff. 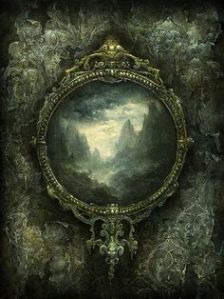 See not the future of the man, but his heart’s desire, instead.

Now, this wouldn’t be much of a post from me if I left it at that, would it? Naturally, this train of thought has led me to consider how augury (or ‘divination’, if you like) might work in a fantastic setting like, say, Alandar. In that world, sorcery is used regularly as a means to predict and prepare for the future. There are many variations of it and all are very complex, but the most powerful kind of augury is scrying. The magi (and therefore the Defenders) have used scrying to see what will happen or is happening in a particular place (assuming they know the place) or to a particular person (assuming they know the person). In the sequel to my debut novel (The Oldest Trick, part 1 out February!), my hero finds himself locked into a particular course of action. He wonders whether he truly has the freedom to cease to walk that path. You see, his enemies have set things up so that the most apparently advantageous course of action is the one he is taking now. He knows this. The thing is, Tyvian has no evidence to tell him what a better course of action would be, so what real choice does he have to stop doing what he’s doing?

Part of the trick with scrying is that it isn’t perfect. Yes, a sorcerer can see the future, but only one possible future. It takes many, many scrys of the same situation to reliably predict what the most likely outcome is, much like the predictive models used by meteorologists. Given that anybody is capable of making many different decisions in may different situations, the precise path one plots through life is intensely variable. Situations that are unpredictable by nature and require a good deal of split-second decision making (such as accidents, battles, and the like) require that much more work to gain a useful prediction and, therefore, the magi of Alandar often can’t predict things more than a few minutes to a few hours ahead of time.

But untangling the tapestry of fate is not the only way to know what someone will do. There is another way: know who they are. Yes, scrying what might happen to a man will reveal all the choices that are possible, but this really isn’t much different than being the man himself, in that moment. If you know somebody well enough, you can determine what course of action they will take more often than not, anyway, so long as you know what options are open to them. Somebody who knows me would know that I would never harm a child or allow a child to come to harm if I could possibly prevent it, and so if I’m in a situation where a little kid is in a burning house and I can help, it isn’t much of a leap to know that I would run into that burning building. This is part of what Baumeister means when he discusses ‘self control and rational choice’ as an evolutionary model that has enabled our species to thrive. That, though, might not be really the same thing as free will. After all, if I will always choose the same path when presented with the same choices in the same circumstances, how free am I, really? Aren’t I just some kind of particularly advanced algorithm? Aren’t we all?

Do we need to see the future to really know what we’ll do in the future? If not, how can that be called ‘free will,’ exactly?