This weekend I watched the last episode of the second season of Star Trek: The Next Generation and, as I did here for Season 1, I’m going to give a rundown of the best episode and worst episode of the season (in my opinion) for your enjoyment or, I suppose, rage.

First off, let me just say that the second season was a vast improvement over the first one. Here the show found its stride and started to look more like the Star Trek I remembered and loved, rather than its poor, unsophisticated cousin. Many of my favorite episodes were here, including “A Matter of Honor” (Riker among the Klingons), “Loud as a Whisper”, “The Icarus Factor” (Riker’s dad), and others. Even Doctor Pulaski, who I never much cared for, served to be a pretty reasonable character. Miles O’Brien starts to get lines (though he’s still not much more than a sketch), Worf gets significantly cooler, and so on.

The Worst Episode: “Shades of Gray”

Now, there were a lot of silly episodes in this season to pick from. There’s the one where Wesley falls in love with the shape-shifting pretty girl and her big hairy nursemaid tries to kill him (“The Dauphin”), which very nearly made the list (I remember yelling “Furry Monster Showdown!” at the television screen several times). There’s the one with the space Irish (“Up the Long Ladder”), which was vaguely insulting to the Irish. There was the one where Lwaxana Troi tries to marry every man aboard the Enterprise as a side effect of Betazoid menopause (“Manhunt”). Finally, there was the one where Troi has a mysterious space-baby (“The Child”) and which would have been the worst episode of the season were it not for Worf’s clear desire to incinerate an infant with his phaser, which somehow made the entire episode more palatable (well, at least not everybody is okay with this nonsense).

No, the worst episode, by a nose, is the season finale, “Shades of Gray.” 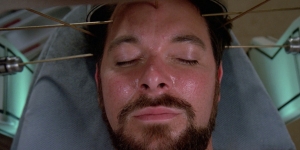 Observe the spine-tingling action! The suspense! The pathos! The…face sweat.

This should be pretty brief: Riker gets a cut, it gets infected, and then he has dreams. Dr. Pulaski saves him by giving him bad dreams. The end.

I’m serious, that’s it. Oh, well Troi cried, but that’s to be expected – she cries in at least 50% of the episodes.

I have grown used to a world in which the season finale is something spectacular, something shocking and amazing – something that makes me sad the show will be gone for a few months. I forget that such was not always the case in the old days. In some shows, the season finale just meant the writers were tired and didn’t have any more ideas. What are a bunch of overworked television writers to do? Well, run a clip show, obviously. How do you do that? Ah, yes – an extended dream sequence.

So, that was basically it. Riker has a neural infection that is killing him and falls unconscious. While Troi weeps incessantly at his side (seriously, lady, if it’s that upsetting to feel his dreams, LEAVE THE ROOM), Doctor Pulaski alters Riker’s brain chemistry to repel the infection (don’t ask). This means he dreams about stuff. What does he dream about? Well, all the episodes he’s been in during the last two seasons.

This leads to us watching stupid clips from the worst moments of the last two years. Want oil slick monsters? You got it. Want Riker making out with women in knit tank-tops? Check! Want Riker getting beaten up by an old man possessed by a bug? Will do! All of this while the frame plot plods along at a slow pace towards its inevitable, absurd, and predictable conclusion. Riker is saved! Yay! How Dana Muldar and Marina Sirtis were able to stand in that room and spout exposition and technobabble to one another for that long without cracking up is beyond me. Overall, this was arguably the laziest episode of television since that time the producers of ALF pretended to have Alf sub-in for Johnny Carson on the Tonight Show and the whole episode was just a long joke about how the pope was in the bathroom while they showed random clips sprinkled throughout the show’s run.

The Best Episode: “The Measure of a Man”

If you don’t remember this episode or have never seen it, you cannot say you are a Star Trek fan with any accuracy whatsoever. I mean that.

Of note, this scene did not play in Riker’s memory while he was doped up in “Shades of Gray”. We didn’t get to see episodes we wanted to see again there, oh no.

This is the episode wherein Data’s identity as a real, living, sapient creature is established in Federation and Starfleet Law. It is a courtroom drama, demonstrating the flaws and elegance of our modern adversarial method of justice while, at the same time, exploring truly profound moral issues that are being and will continue to be debated from now until there is a real Data sitting in a courtroom across from a real scientist who wants to take him (it?) apart. There is nothing I don’t like about this episode. The dialogue is tense, the acting superb, the concept interesting, and the outcome incredibly satisfying. Patrick Stewart gives a stunning performance, delivering his defense with all the subtlety and skill of a true Shakespearean. Yeah, maybe I’m waxing slightly hyperbolic, but I challenge you to watch this episode and not feel the same way.

As we move closer and closer to creating true artificial intelligence, the debate about the rights of such a creature are going to become more and more important to consider. This episode explores the issue deftly and efficiently, and I applaud it for that reason. If you haven’t seen it recently, go and watch it now. If you can’t be bothered, watch this clip:

I dare you to top that performance. I double dog dare you.

Tags: scifi, Shades of Gray, Star Trek the Next Generation, television, The Measure of a Man