More Audio Samples for Writers of the Future Vol 31 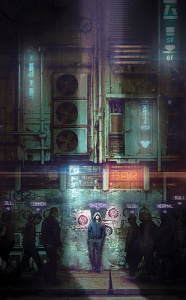 The artwork for “Switch” by the incredibly talented Daniel Tyka

Hi, everybody! So, yes, I’m acting like a broken record about the upcoming Writers of the Future Anthology (Volume 31), but that’s only because it’s crazy awesome and you should all get it. Not for my sake, either – my fellow winners are an amazingly talented bunch and you should get in on the ground floor here. I’ve got two for you today.

First is Steve Pantazis’s story, “Switch,” about a cop addicted to a high-tech new drug trying to solve the murder of a kid who was high on the self-same drug – a drug that accelerated the human mind to its highest potential. This is a dark, gritty tale long on style and suspense and you’ll get a kick out of it. Also, the world is the same as Steve’s novel Godnet, which means the world-building is top-notch (and I’m a sucker for good world-building, let me tell you).

Next…well…next is Sharon Joss’s story, “Stars That Make Dark Heaven Light.” She is the grand prize winner this year, and it is very much deserved, as this story is a simply magnificent tale of growing up, finding your place, and learning to love. Oh, and aliens and genetic engineering, too. Great, great story that you simply must read. For now, listen to the first bit:

Elsewhere Among My Very Talented Friends…

Liana Brooks’ novel The Day Before is out now from Harper Voyager. It’s a time-travel science fiction mystery, so check it out!

Steampunk author Beth Davis Cato has a new short story out: The Deepest Poison. If you liked The Clockwork Dagger, you should check it out!

And as For Me…

Iron and Blood, the thrilling second half to The Iron Ring is released in a little over a month. Pre-order now! Also, keep an eye on this space: I’m going to be announcing a giveaway contest soon, just as soon as I come up with a cool idea for one. I will also be at the Barnes and Noble Prudential Center in Boston MA on May 9th from 2pm-4pm signing copies of the Writers of the Future Anthology. W00t!

Exciting times, no? Go forth! Support authors! Read much!