Going It Alone: The Die Hard Effect and RPGs 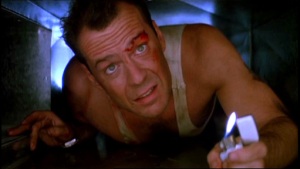 Face it: You’ve all imagined yourself in this situation

That’s the key, right there–himself. John McClane needs nobody, because everybody else is an idiot or a screw-up or actually working for the bad guys. Granted, the other cops in Die Hard: With A Vengeance had his back, but they were always a couple steps behind McClane. He was the real show. He made it all happen. And it was awesome. When I was a kid and, admittedly, even today, I often sit there and think to myself: if there were terrorists with machine guns storming this building right now, how would I get out of it? How could I get myself a machine gun (ho ho ho?)?

In RPGs, when a PC winds up having to go it alone against the bad guys with limited resources, I call it (and have heard it referred to as) ‘the Die Hard Effect’ or ‘Die Harding’. It can frequently be a lot of fun–it lets the player who is Die Harding feel both stressed out and really cool at the same time, and the other players who are playing second banana get to, essentially, watch a really suspenseful couple minutes where they hope their buddy has the chops to rescue them/find them/win the day, etc.. It has to be used responsibly, however and with caution, since there are a lot of problems with doing this without forethought.

Problem One: There is More Than One Player

It is pretty rare that you’ll be running a game with only one player present. If you’ve got a room full of people, spending a couple hours with only one of them playing is a bit rude at the worst or potentially boring at the least. Even the player getting all the attention can feel bad about it, sometimes.

The solutions for this problem are two-fold: First, limit the period of time the Die Harding would take. Less than an hour and you can probably get away with doing it in one shot and not overly ruffling anyone’s feathers. Second, have things for the other players to do, even if they’re less essential. Break up the Die Harding with other stuff (and there was other stuff going on in those movies, you know).

Sometimes, even though you did your best to keep things fair, the PC who is Die Harding is hopelessly over their head. This sucks for them, and has the opposite effect intended. This becomes a prime opportunity to use the Idiot Ball or, conversely, give the player time to think out of their situation by switching to what the other players are doing (heck, the other PCs may even be able to help somehow). Whatever you do, don’t have the player feel embarrassed or stupid or like a failure–bad plan. If they fail, at least try to make that failure dramatic, cathartic, or spectacular in some way so that they will be talking about it for weeks to come.

Problem Three: “How Can The Same Shit Happen to the Same Guy Twice?”

Don’t Die Hard all the time. Just don’t. It’s a once-in-a-while thing to change the dynamic of the game for a session and make things exciting. If everybody is off doing their own Die Hard thing all the time, the end result of the Die Hard effect (feeling awesome) is diluted. It winds up being like at the end of the third movie, when McClane says ‘Yipee Ki-ay Motherf—cker’againand we all roll our eyes and think ‘get a new line, dude.’ Die Hard sparingly, and only in extreme moments where the stakes are high enough to justify the departure. I’ve found getting the rest of the party captured is a good excuse, or having one player get captured and have to escape alone. There are lots of other ways, too, but make sure whenever you do it, it is a departure from the norm rather than the norm.

I’ve had players Die Hard in my games frequently over the years, both in good ways and bad ways, both successes and failures. When it works, it’s some of the best moments of the campaign. When it doesn’t, you look around the room when you’re done running the session and see a lot of bored people and disappointed faces. I do recommend trying it, but do it right. Think ahead. Get everybody on the edge of their seats, and you’re doing fine.