I am 100% seeing this movie, though, if only for this scene alone.

Saw a tweet from Sam Sykes the other day which has been kicking around in my head ever since. I tried to find it to post, but I can’t seem to track it down, so you’ll just have to put up with a loose paraphrase. Essentially, Sykes, in response to the newest Star Wars movie, Solo, observed that he kinda preferred not knowing exactly what the Kessel Run was or what Han and Chewie got up to. He worries that this “obsessive canonization” cheats the audience out of their own imaginations, which are more evocative and powerful anyway.

The thing that stuck with me here is the simple fact that I love worldbuilding (and I get waaay too obsessive about it), but I also very much understand that worldbuilding does not create story and, in fact, it can potentially take away from story. I think Sykes has a really important point there – leaving spaces in your world building allows the reader to fill in blanks in potentially wonderful and exciting ways. As a writer, you shouldn’t even try to explain everything – you merely need to fill in enough so that the audience can do the rest.

Reading is a collaborative process. That sounds weird – reading is done alone and writing is done alone, so how is this possible? Well, the reader and the writer are still engaged in a kind of collaboration, just one that is separated by space and time. If you read a book of mine, you are getting my end of a story. You, however, as reader fill in many of the gaps in that story. And furthermore, you fill them in typically in a way that makes the story more interesting to you. The more I fill in for you, the less work you have to do (which can be good), but also it makes your imagination do less for you. Imagination is key, though – as a writer, you want your book to set the reader’s mind aflame with possibility and wonder. Too much detail can kill that magic.

Star Wars is a perfect example of this. Much of the magic of the original trilogy was rooted in the fact that it hinted at a much larger world, but didn’t bother to codify that world. You were left to wonder what Kessel was, why Tibanna gas was valuable, what the Old Republic was like, etc., etc.. For every mystery it revealed, it hinted at more mysteries. People sunk themselves into that world because they wanted to explore (and they could explore!). 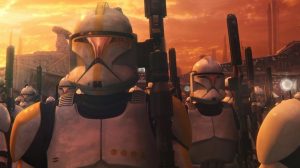 I don’t know what I expected, but I expected the Clone Wars to be cooler than this. Which is kinda my point.

Think, then, of the let-down that the prequel trilogy was. We saw the old republic and fought the clone wars and they were, well, kinda lame. The Jedi were dull. Even Palpatine was a bit of a bummer. Anakin Skywalker? We didn’t even like the guy. The desire to reveal too much about the world – to canonize even more – was a killer. When you throw in the obsessive canonization contained within the EU, we quickly arrive at one of the major reasons The Last Jedi got such negative reactions from hardcore fans. They felt as though they already knew what could and should happen, and then the movie changed that. They felt as though they were dealing with an already explained world and that TLJ was breaking the rules. And, in a sense, they were right, except that the world they thought they knew was being rewritten, and so all the old stuff doesn’t apply anymore. This, incidentally, is good for the long term health of Star Wars, but it doesn’t seem that way to people who have gotten themselves invested in what is “canon” and what isn’t.

All of this is a roundabout way of saying that every detail you nail down in a story is a detail you can’t change later very easily. The more you nail down, the less can change. The less that can change, the more stale the world becomes until, at last, it is rigid and boring and only appeals to those old hardcore fans (who are always the minority, anyway). As a writer, then, it becomes an important challenge to figure out how much to reveal to keep the story evocative and immersive and how much to leave blank so that the audience can build an even better world into their imagination.

Vrokthar Explains That You Are Wrong

The skulls are out for cleaning. They are usually there. Piles of them.

Greetings, gutter-born sewer people of the industrialized and enslaved Wetlands! It is I, Vrokthar the Skull-Feaster, Scourge of the Northern Wastes. It seems I am yet again driven to bellow oaths of vengeance from my throne of skulls, even though it was scarcely a half-moon’s time since last I came to berate thee. But some things will not stand, and so Vrokthar inscribes his mighty words into his slate so that you might tremble at their utterance.

It has come to my attention that you have liked a Thing that I did not. It matters not what. What matters is this:

It matters not what this Thing is! However, for the sake of argument, let us say that this thing is a tale of high adventure in distant lands in ages long past. Perhaps about a cadre of barbarous raiders who hath usurped the authority of their rightful leader and have, therefore, sought succor from an ancient, wicked sorcerer who will smite the king’s champion on the field of battle. Yes, let us say it is about that.

Let us therefore say, for the sake of argument, that Vrokthar did not enjoy this tale. In this case, it is impossible that you have enjoyed it. No matter how feeble-brained or malnourished you are, that which Vrokthar believes must, by rights, be the belief of all. This is the Order of Things. Vrokthar is the Keeper of Universal Truths. I know this because the previous Keeper of Universal Truths, Hodrank the Horrible, was slain by mine own hand and his head removed and skull polished so that I might keep the Truths therein (just as Hodrank kept the Truths in the skull of his predecessor). As I hold the skull, so too do I dictate your experiences. If I say you are wretched, cowardly wetlanders, it is doubtlessly so. If I say you are diseased, half-dead wastrels, likewise the truth is readily apparent to those who have eyes.

Of note, those who contradict me will have their eyes gouged out. So it is written.

But Vrokthar digresses! The main thing is this: your opinions are worthless. If the Thing is obviously bad to Vrokthar, it is bad by nature. There can be no argument, because Vrokthar is right. And yet you pack of whining dogs cannot cease your howling! “We loved it!” sayeth you. “It was everything we hoped it would be!” you continue. Fie on such untruths! Your weak beer and over-cooked meats have weakened your minds or, worse yet, you are seeking to spread sedition among Vrokthar’s tribesmen!

Yes! I see your plot, now! Ha! You are undone! Your inexplicable love for the Thing can only be rationalized as a duplicitous ploy! Clearly you know the Thing to be terrible – even a half-blind child could see this! – so you are simply lying to gain favor among the weak and impressionable! But of course such an obvious ploy is doomed to failure! As Vrokthar knows the Thing is terrible, so too will his followers – they are loyal and, more importantly, know that I’m carrying around Hodrank’s skull full of Truths.

The logic here is clear and obvious! Vrothar is Right! As Vrokthar is Right, so therefore must those who disagree be Wrong. The Wrong must be purged so that the Right may claim their lands and loot their halls. That’s just Nature for you. Woe to thee who loves the Thing that Vrokthar hates! Thy name will be burned from the sagas, just as this terrible movie shall be expunged from the minds of the Righteous! Yes, flee from my wrath – the hunt only makes the kill sweeter. In time, you will see that mighty Vrokthar is right about that, as well.