Everybody likes to laugh in an RPG, but so few players are willing to make their characters comic relief. Everybody is usually in some kind of contest to be the coolest, toughest, scariest, or most impressive. Not so my friend, Joe. In the very same 7th Sea Campaign that featured the stalwart and inexorable Helmut Dauben Kohb, Joe played Avalonian (i.e. English) expatriate ‘Lord’ Edward du Charouse, who was actually a Marquis, and that only by marriage to the lovely Michelle du Charouse, reputed to be the most beautiful woman in Montaigne (i.e. France). This character was, hands down, the most ridiculous, hilarious, and wonderfully fun character I’ve probably ever had in a game. Let me tell you why: 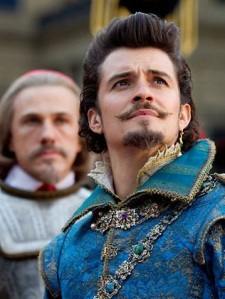 Say, is that wench showing some ankle? Grrrr…

Joe built his entire character around three things: (1) A Romance background with Michelle, the stereotypically fickle and spoiled Montaigne noblewoman, (2) the Lecherous flaw, meaning Lord Edward was pretty much constantly trying to score with any attractive woman he saw, and (3) the Dangerous Beauty advantage, meaning women were drawn to him like flies. Throw in the fact that he was an arrogant fop, a blissfully ignorant dilettante, and a pretty talented duelist, and this resulted in an absolutely enormous amount of trouble that followed Edward around, everywhere he went.

You see, Edward cheated on Michelle constantly. With anything. All the time. He’d have relationships or attempted relationships going with every single young female NPC in the game at the same time. He wasn’t clever about it, either. He once, for instance, invited two women for a romantic evening walk in the gardens of a Vodacce prince at the same time and spent the whole scene finding excuses to leave one alone, scale a wall, and return to the other one. One of these women was a deadly swordswoman and bodyguard to the archvillain Villanova. The whole affair did not end well.

Furthermore, anytime Edward was caught cheating or even paying attention to another woman, Michelle would throw him out of their château. Michelle was the one with all the money, all the prestige, and all the influence; without her, Edward couldn’t possibly live to his standards. So, regularly, we would embark upon epic plots to regain Michelle’s love, punctuated by ridiculous side-adventures, such as vows made in court that he could ‘fence a bear’ (didn’t go well), that he was on ‘a secret mission from the Musketeers’ (he never was), or other similar egocentric activities. I don’t think we ever laughed harder in a game, my friends and I.

How Edward Dealt With His Problems

The best part about Lord Edward was Joe’s unflinching willingness to get him into massive amounts of trouble all the time, for any reason. You know how most players spend all their time trying to avoid complications, planning their assaults on the enemy castle with painstaking detail and with buckets of backup plans? Not Edward. He just waltzed right in, assuming his pretty smile and his money and, failing that, his skill with a blade would make it all work out. It regularly blew up in his face, got him and the rest of the party in huge amounts of trouble, and the adventures that followed with them trying to get out of that trouble were simply priceless.

There was this one time that the players got their hands on a small ship that had its ballast replaced with gold bars. There was so much gold there, they could have bought entire kingdoms with it. This, everyone knew, was the tip of the iceberg of some sinister plot that the PCs would spend the rest of the campaign unravelling. They knew whoever’s gold this was wouldn’t hesitate to kill them all if they were discovered with it. So, when they sailed into port, everyone agreed that they were going to keep the gold secret.

So, when most of the party left and put Edward in charge of the gold, what did he do? He grabbed a whole gold brick, walked to the nearest brothel, threw the gold down on the floor and said ‘there’s more where that came from, ladies!’ When the players got back, their ‘secret’ ship had become a party boat, with Lord Edward engaged in an orgy with half the whores in port, throwing gold around like it was water. Absolutely hilarious and it got them in incredible amounts of trouble. The Vesten rune mage with them also blew Edward out the back of the boat with a lightning bolt. Good times.

I won’t even get into the time that he, during the game’s version of the French Revolution, founded ‘Lord Edward’s Home for Wayward Women (No Ugly Chicks).’ That didn’t end well, either.

Nevertheless, Edward remained charming and likeable, even if he was creepy and arrogant and chauvinistic. He managed this by always realizing how wrong he had been and making it up to those he cared about, often at great physical risk to himself. Still, for all his attempts to go the straight and narrow, everybody knew he would fall again, do something foolish, and the ridiculous swashbuckling fun would begin again. All this, by the way, as a result of a player, Joe, who knew that fun in an RPG isn’t about avoiding trouble, it’s about going out there and finding it, even if you need to make it up yourself.

Play like Lord Edward everybody. Your games will be better for it.